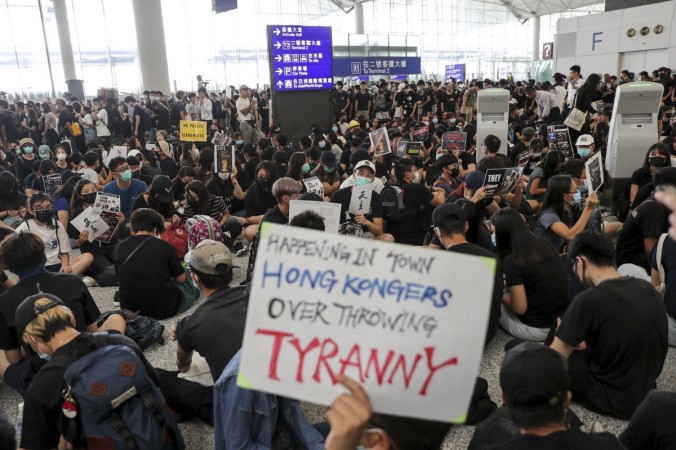 The protests in Hong Kong have had quite a few different narratives – the extradition treaty, democracy, police violence. Amongst one resolute strand of this riotous assembly, however, lies the optimistic idea that with a few tweaks here and redistribution there, the fundamental economic model of the city is a sustainable one. In that context, many protestors feel that it should be left well alone to prosper with its trade and rule of law. The only problem is, this is not true for at least two reasons, neither of them immediately do to with China.

The first is, as I have previously expounded upon, the changing shape of regional trade and the underlying end of entrepôts as they have historically existed. The vast majority of such centres’ lifeblood comes from a structure of trade which only exists in broadly imperial contexts. Nonetheless, even given that change, the world still sustains Bermuda, and Luxembourg, and Switzerland. The second point, therefore, is that Hong Kong could not emulate any of those examples, because ultimately it has too many people, and they are too poor.

To demonstrate the structural limitations of Hong Kong’s economic development, I have contrasted several key metrics against a selection of jurisdictions who represent, to a greater or lesser extent, paradigms of what an independent trade-based Hong Kong is supposed to look like. For this exercise, I look at Singapore, its long-standing regional counterpart which faces its own problems; three European examples of various sizes (Switzerland, Luxembourg and Malta); and finally the true offshore example of Bermuda although this has limited statistics.

One basic point is the city-state’s size: unlike other “offshore centres”, the population is of the same scale as Singapore and Switzerland. We will look at per capita numbers below but it should be remembered that absolute population size brings its own difficulties, not least in terms of proportionality between the offshore centre in question vs the large economies they seek to serve. Bluntly put, OECD economies can ignore Luxembourg, Malta and Bermuda as competitive threats; Switzerland, Singapore and Hong Kong they will keep a suspicious eye on – and have been closing in on for decades. 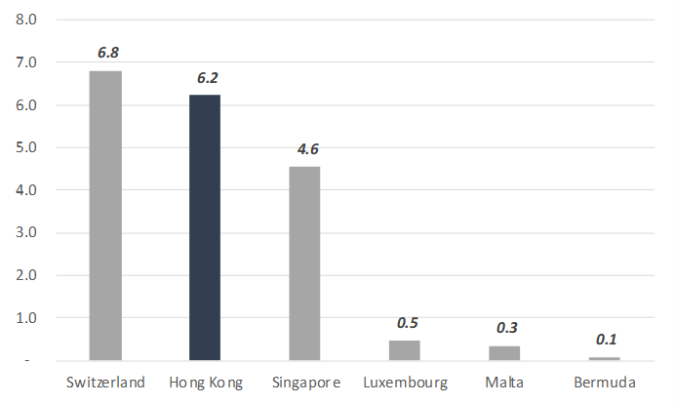 So then onto the per capita numbers. We know that Hong Kong and Singapore are by far more densely populated than other “offshoring centres”. This has an inevitable knock-on effect of downward pressure on wealth (not least property) – median asset ownership per capita is significantly lower in Hong Kong and Singapore than Switzerland and Luxembourg, and only on a par with somewhere like Malta. 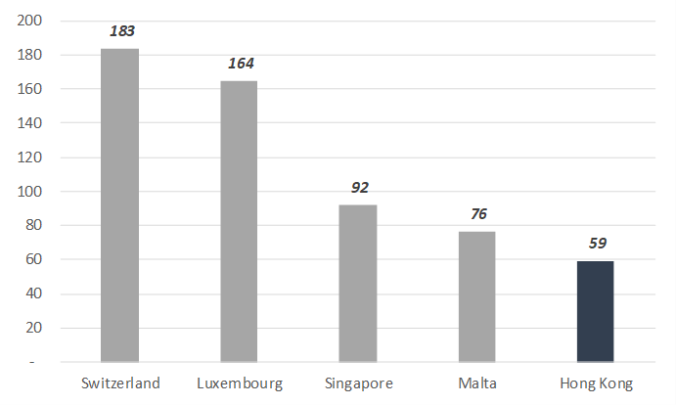 Why does this matter? Well, there are two further calculations that arise from these figures. The first is the population size to asset base, which tells us whether a given country might be considered relatively over-populated. By this score, Hong Kong fares poorly, at more than double that of Switzerland and almost double Bermuda and Luxembourg. The wealth base of a country represents all the things it has accumulated over time and gives an indication of the future – ranging from capital assets such as production capability to softer things such as IP and skills. The higher this ratio, the more people there are dependent on a flimsy asset base and the more susceptible it is to the vagaries of neighbouring economies.

Ratio of population to asset base 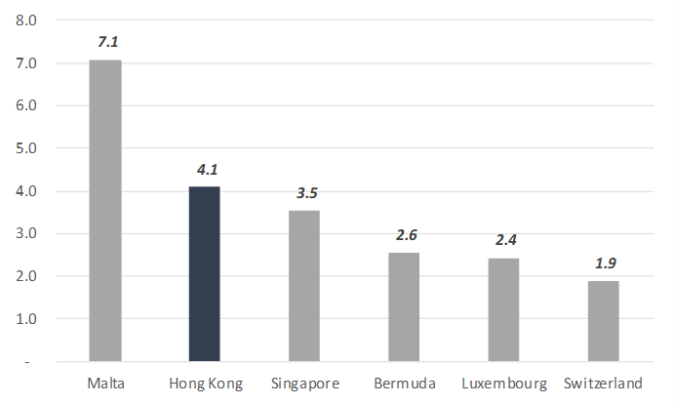 The second calculation is that of inequality. For this, I use my proprietary “Pang Coefficient” instead of the rather dated Gini numbers, where as a rough rule of thumb I look at the ratio of mean to median wealth per capita – the greater that ratio, the greater the inequality. (The antiquated use of Gini, which is based on incomes and therefore ever less relevant, is the subject of another discussion). In this, Hong Kong again stands out, being notably higher even than Singapore which is partly to do with Singaporean policy of public housing. And whereas Malta is even more over-populated than Hong Kong, this is mitigated somewhat by its equal spread of wealth.

Inequality as measured by ratio of mean to median asset distribution (the higher, the greater the inequality) 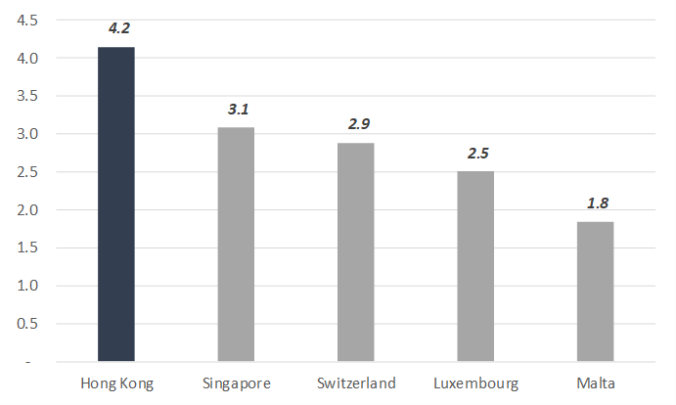 When we put this together, we begin to see a picture of where Hong Kong lies in this landscape of offshore centres. It is the only one of these jurisdictions which suffers the double-whammy of being both over-populated and highly unequal – and the unrest it is encountering today is the result: 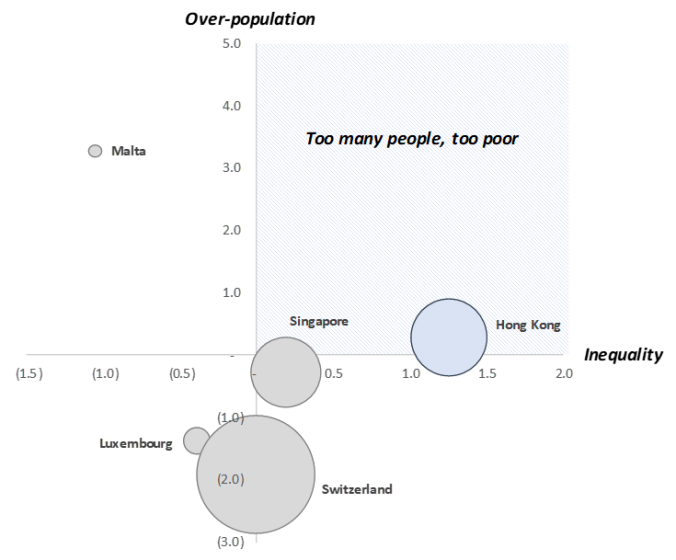 Hong Kong did not exist two hundred years ago; and it will not exist in two hundred years from now – at least, not in the way it has thus far. The Asian entrepots are a curiosity of time and place, as a rent-seeking tolling gateway to an imperial trade flow which had fat margins during that structure. Those fat times led to an abnormally swollen population which, accepting inequality, were able to be live off the crumbs of the China through-trade. As those imperial structures receded, the margins have become thinner also, meaning that the number of people which can be sustained from that base will have to decrease.

It has been well-noted that house pricing is the most prominent driver of the current discontent – I have previously written on the “aspiration deficit” for young people in Hong Kong and Taiwan due to their comparative uselessness within the modern economy. But the reality is that even solving this through redistribution will only alleviate the problems for a while, not long term. Furthermore, the reliance on property rather than capital assets for wealth within the Hong Kong economy (it just does not and cannot “make” anything) severely limits the efficacy of this. Unlike redistributing the “means of production”, redistributing land is only going to reduce the value of the land leading to a division of misery all round. Any gains made in equality would be more than offset by a reduced asset base.

In other words, even a good, effective, popular, well-meaning government of an independent Hong Kong would not actually resolve the underlying issues from which the SAR is suffering. Bermuda does exist – because it is tiny and serves a niche that Hong Kong is far too big for now. Switzerland makes stuff – Hong Kong does not. There is nothing Carrie Lam or her successors can do about the diminishing role of entrepot states within the multi-polar post-colonial regional and world context. And here we face the other problem of Hong Kong: parochialism.

Those fat-margined imperial times also created a whole rent-seeking mentality amongst a (largely immigrant) population who are ill-equipped for the post-imperial age. The youth of Hong Kong are notably unadventurous and unenterprising; if they were offered steady civil service jobs which could lead to buying a small apartment, most would take it. Despite having the world’s third largest financial centre and the world’s second largest market on their doorstep, there are few startups of any scale and the lack of innovation is astonishing. Whereas 2m of Taiwan’s 13.5m working population is abroad, mostly in China, only a fraction of the same can be said of HK. Furthermore, overseas Taiwanese inhabit many Mainland startups and businesses in Beijing and Shanghai; I have yet to meet a single Honkie in the same position. Hong Kong was adventurous in its birth but is not as it approaches its death.

The travails of Cathay Pacific demonstrate in microcosm that Hong Kong’s destiny simply is not in its own hands; being a better airline does not save Cathay from the fact that people do not need to fly through Hong Kong to reach their destination. Furthermore, many wealthier Chinese actually prefer Chinese airlines, strange as that might seem, because ultimately mature markets will have their own localised preferences, and the outsider – however international they pitch themselves as – will never provide this as well. Of course, Hong Kong exercises a disproportionate position within the sentiment and consciousness of foreigners, because like locals, those foreigners need to believe that China would continue to need Hong Kong. If they do not, the role of foreigners and their comfortable if tenuous existence disappears also.

Arguably though, the end of that world was symbolised as long as ten years ago by the closure of the Far Eastern Economic Review, a journal valiantly propping up the viewpoints and pretences of the post-colonial 1.0 model. Looking forward, the people of Hong Kong will have to move on – either, optimistically into the GBA where house pricing and other pressures will be alleviated; or else through emigration or even lower birth rates. The positive version of this story is one where younger people embrace the opportunities in China and start making something of it; but having now lived and worked here, I would not hold my breath.