“Consumption downgrade” has been a term bandied around the China-watching community for over a year now. The idea is that slowing income growth has begun to restrict middle class spending, whether it be on luxuries or the day-to-day. Analysts point to disappointing results from JD.com and NIO, the growth of lower-class commerce platforms such as Pinduoduo and VIP.com, and even the rise of social media such as Toutiao in support of this assertion. The anecdotal reporting, accurate as ever, interprets this as households actively downgrading: yesterday buying a Mercedes, tomorrow buying a Geely.

Yet I would posit a different theory. Whilst around the edges, some downgrade of consumption within individual households may hold true, by and large the evidence points the other way: luxury car sales are forecast to grow at a healthy clip of 9%, for instance, which whilst a slower than the previous decade (the market is clearly maturing) is hardly indicative of like-for-like belt-tightening. Rather, what we are seeing is a stratification of Chinese development, where the likes of Pinduoduo actually serve not the middle classes of today, but the newly emerging consumers of lower-tier cities – “the other 50%” as it were. And here, there is genuinely noteworthy, namely that it now appears many of these newer middle classes may never reach the same level of affluence as the pioneers in Shanghai and Beijing (sketched out theoretically below):

Consequently it is the weighted average of the total incremental growth – in other words, of all the new consumption coming online – which is getting lower. Individuals however are still spending in-line with the past, and even still upgrading. The fact that lower-tier cities may not emulate the top cities is of course some cause for concern – but it is hardly unusual by OECD standards. It merely means that whilst luxury still has a market, mass premium and even mass common have more exciting times ahead. This is important, since is supports signs that Chinese growth remains surprisingly robust in the face of recent headwinds, and in particular that nominal GDP (at this stage in the cycle a far more relevant indicator than real GDP) is stubbornly consistent at 8%+.

On the other hand, “consumption downgrade” has been alive and well in OECD economies for some time now. One need simply look at the emergence of the sharing economy to see it in action: Uber, Airbnb and WeWork are all examples of capacity-sharing which reflect the fact that today’s younger people will never have what their parents had. However trendily dressed up as a “lifestyle” choice, it is not; if given the option, the majority of Uber users would rather have their own car; Airbnb customers would rather be able to afford a hotel; and WeWork tenants rather the funding needed to have their own office. Nobody has chosen to be reduced to this kind of life, although they are putting a brave face on it. It gave rise, in part, to Trump; it gave rise to Brexit; and it is a major driving force for the economy and innovation in the West today:

Which brings us to Brexit. Having long been a Remainer, I see Brexit being a self-inflected economy wound which is less than ideal. However, I have also always maintained that Brexit is a political debate, not an economic one; and it would and should be won and lost on the political questions and not on economic. On political grounds too, I am a Remainer. Nonetheless, it would be remiss not to see the opportunities that Brexit actually does present, not in terms of the fantasistic national resurgence posited by some on the fringes of the Conservative Party – let us call them the Liam Fox wing – but rather in acting as a test bed for innovation in consumption downgrade.

Because ultimately Brexit is a localized process which is only bringing forward long-term secular trends of declining middle-class income which are happening anyway, and which will be increasingly and universally visible across the OECD in the coming years. Britain will merely be ahead of its time. Therefore, any innovations that the British economy produces through this would be well-positioned for the broader decline across adjacent markets, ready to be rolled-out into the rest of Europe and America just as others too begin to experience their own downturns. 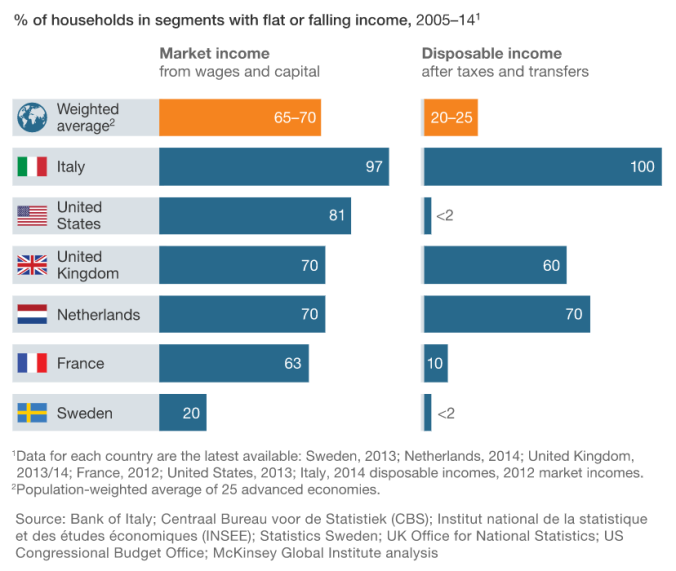 Source: Poorer than their parents? A new perspective on income inequality (McKinsey, July 2016)

What will these innovations be? If I could tell you, I would have a substantially larger bank account; but my own sense is that it lies somewhere in areas such as consumer financing and potentially further changes in shared services. The irony is that the consumption curve for Gen Z will resemble something akin to a Giffen curve. For all the debate between ‘boomers on the one hand, claiming that the kids are “wasting their money on iPhones”, and young people on the other, lamenting that they will never be able to afford a home, the truth lies somewhere in between. The more that large capital investments such as housing feel unreachable, the more people will spend their remaining income on frivolous goods. The current younger generation can indeed be both poorer and more prone to disposable consumption at the same time – something I will for now label the Paradox of Chic Poverty (again, helpfully sketched out below):

In short, consumption downgrade is not what it seems (China), and at the same time has been with us for some time (Uber / WeWork / Airbnb) whilst potentially presenting a great opportunity (Brexit). Three cheers, then, for the rich getting richer!

In the latest bid for foreign recognition, protestors in the troubled city of Hong Kong have turned to 11th century monarch King Cnut. Organisers hope that Cnut’s influence may bring the movement credibility, and have rebuffed suggestions that the Norwegian’s policy of holding back the tide met with mixed success.

“Like King Cnut, these protests have supernatural powers that show we can in fact hold back history”, said a visibly emotional Joshua Wong, who has been courageously leading the protests from The Front Line, the name of a yacht currently anchored off Bermuda.

“Besides, if this all goes nowhere, just like Cnut some of us will also be able to sail to sea and avoid the consequences.” Speaking via Skype, Wong noted that he could “practically smell the grapeshot.”

“I have been assured that police brutality on the ground closely resembles what I can see online”, although he went on to note that he may have been confusing news reports with back episodes of Peaky Blinders which he has been catching up on.

Asked about Wong’s likeness to the long-dead Norwegian, one local store owner in Causeway Bay suggested that Wong may have chosen ‘Cnut’ only due to a misspelling. “They’ve burned down my only way home now so I guess I’m going to have to swim across to the New Territories. But that’s what real freedom is, right?” another said.