The Guardian recently caused a splash by publishing a piece discussing Donald Trump’s remarkable resilience in the polls despite the near universal opprobrium being heaped on him by the media. It had some sage words for why media hostility was actually hardening Trump support, as well as pointing out that ultimately, Trump is giving most Republicans what they want. Both are true, but the piece also omits one major explanation for the stubbornness of the numbers; after all, 87% of Republicans support Trump, but that is far too little to explain 43% approval numbers. Instead, it is the support of 36% of “Independents” and even more surprising 9% of Democrats which he continues to command (both numbers which have increased markedly during the first half of 2018), which make up the difference:

Presidential Approval Ratings between Q1 and Q2 of 2018 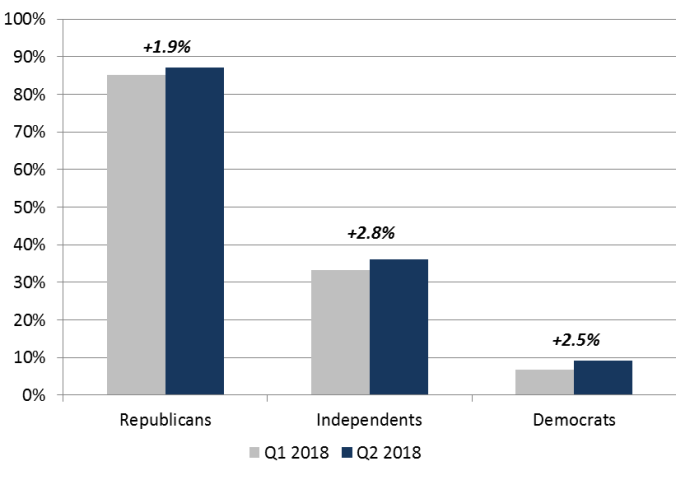 In the climate of public discourse, his avowed critics find it incomprehensible to imagine who these non-Republicans might be. But yet it is these independents and Democrats who make up the group supposedly so “racist” that they voted twice for Obama before voting for Trump. Why, as the Economist asks, will the Democrats “struggle to win back Obama-Trump voters”?

The biggest problem for Trump’s detractors is the fact that he is, on some level, on “the right side of history” at a moment when hardly anyone else in public life is. By this, I mean that on some of the largest issues weighing on the public today such as trade, immigration and even international institutions, it is Trump who is pushing at an open door, not his opponents. We can be pretty certain for instance that whoever wins the next few elections will not be doing so on a wave of championing more free trade, more open immigration or more faith in organisations such as the UN, NATO, the IMF or the WTO. Instead, the winners are likely to be those who are talking Trump’s language, even if they are not using his vocabulary.

No doubt this idea will cause outcry amongst my liberal friends, but let us consider the evidence. The first such exhibits are the underlying macro themes. For instance, UBS released a note in 2016 charting the recent decline of globalization as a very natural part of the development cycle, and why also there are structural tensions being created in the current situation: 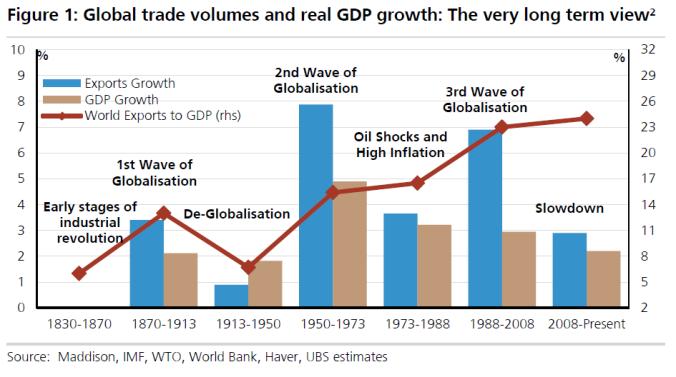 The globalization cycle typically sees high growth in trade matching high levels of growth, followed by periods when trade and growth decline. These are the moments when societies spend a moment to draw their breath and “catch up” to the excessive changes that have been wrought. In an earlier blog I noted the limitations of explaining away trade deficits with capital surpluses for instance, as some commentators quite unashamedly continue to do. The reality is that those who gain from the latter are not the same who lose out from the former, resulting in a political and social tension unaccounted for in scholarship which is postgrad IQ but high school EQ.

Additionally, there is the element of inequality over growth distribution. In the UBS analysis, we can see that despite a substantial slowdown in growth, exports remain at an unrelentingly high percentage of GDP resulting in limited social recalibration. Furthermore, the growth even during the previous wave of globalisation mainly benefited the non-West as this recent HBR study shows:

This is supported from a different angle by HSBC’s analysis of which countries have gained in which era of the recent past:

In broad terms therefore, there is such a thing as “too much trade” and its corollary “too much freedom of movement” (aka immigration). For all these reasons, from the perspective of the American voter, the “right side of history” is the side which will make these changes.

The second piece of evidence for Trump being on the “right side of history” is the surprising consensus for change in these areas. The China “trade war” – an irresponsibly used term if ever there were one – has seen much fear and anguish in the media (very few of whom understand even the basics of trade economics) but actually commands widespread bipartisan support in Congress and has done for some time. The same applies to pulling the plug on TPP and questioning NAFTA – both positions that have long animated the party that produced Bernie Sanders, Dennis Kucinich and Howard Dean. Some determined anti-Trumpers of the Left have now painted themselves into the absurd position of defending the free trade of the WTO, when just a few years ago they were its greatest opponents. On this, they have a credibility problem if nothing else.

But it is not just trade. On immigration, the Democrats are caught between arguing against Trump’s policies even whilst occasionally defending the fact that Obama deported more illegal immigrants than any other president. The reason he did this was popular support for the general principle that borders mean borders. And even with regards international institutions, it has long been understood that many are not working for the US. Obama called his NATO allies “free riders” as recently as 2016, and abandoned the Quadrilateral and G7 to try and reach an agreement in Copenhagen in 2010 much to their anger; meanwhile George W Bush spent the best part of two terms criticizing the WTO and finally abandoned the Doha Round. Clearly, no-one thought these institutions were working well or serving best American interests.

Yet strangely the Democrats have done almost nothing about this, and have found no real successor to Sanders, the only candidate from their side who talked about this. Sanders’ various successors – whether Liz Warren or the newly crowned Alexandria Ocasio-Cortez, have surprisingly little to say on any of these themes other than wanting to abolish ICE. Instead they have left the field to Trump who therefore feels (to the average voter) more like someone who is looking forwards, not backwards, about the world we live in. Where a politician stands on that nexus of trade, immigration and institutions has become a defining and almost apolitical issue; once you strip that away, you are only left with the usual rancorous debates on gun control and whether to install transgender toilets. Those arguments though, pale into insignificance against the background of how to remedy (rightly or wrongly) median wage stagnation. Democrats and Republicans are navel-gazing whilst Trump is allowed to speak unhindered to large swathes of the nation that voted for him in 2016. At the moment, he owns that space even if his methods seem clumsy – as former Australian Prime Minister Kevin Rudd recently said, Trump has been “strategically comforting but tactically terrifying”.

(As an aside, I would point out that the liberal desire to cast Trump as some sort of “reactionary” does not ring true either. I do not believe most of the public actually see him as being particularly anti-gay or anti-abortion for instance. Instead, one of his defining moments on the campaign trail was the highly pragmatic response to the transgender toilets issue, saying they should use whichever one they wanted but business could not pay for new facilities. Mostly, he just does not care. Sure, he is not actively helpful to liberal causes but he is hardly aiming to contain them. Remember, too, that in the Republican primaries almost every sort of more extreme candidate ran: states’ rights fundamentalists, religious fanatics, neo-conservatives and Koch-ite free traders. Trump was none of these things and triangulated quite effectively between them all.)

Of course much of the support for Trump remains cultural, and on what is sustaining this one need look no further than the exceptional piece written by Joan C Williams in the days immediately following the 2016 election. It remains the best depiction of that amalgam of economic, cultural and social thought which passes for “what’s best for my family” in many voters’ minds:

One little-known element of that gap is that the white working class (WWC) resents professionals but admires the rich. Class migrants (white-collar professionals born to blue-collar families) report that “professional people were generally suspect” and that managers are college kids “who don’t know shit about how to do anything but are full of ideas about how I have to do my job,” said Alfred Lubrano in Limbo. Barbara Ehrenreich recalled in 1990 that her blue-collar dad “could not say the word doctor without the virtual prefix quack. Lawyers were shysters…and professors were without exception phonies.” Annette Lareau found tremendous resentment against teachers, who were perceived as condescending and unhelpful.

Michèle Lamont, in The Dignity of Working Men, also found resentment of professionals — but not of the rich. “[I] can’t knock anyone for succeeding,” a laborer told her. “There’s a lot of people out there who are wealthy and I’m sure they worked darned hard for every cent they have,” chimed in a receiving clerk. Why the difference? For one thing, most blue-collar workers have little direct contact with the rich outside of Lifestyles of the Rich and Famous. But professionals order them around every day. The dream is not to become upper-middle-class, with its different food, family, and friendship patterns; the dream is to live in your own class milieu, where you feel comfortable — just with more money. “The main thing is to be independent and give your own orders and not have to take them from anybody else,” a machine operator told Lamont. Owning one’s own business — that’s the goal. That’s another part of Trump’s appeal.

Hillary Clinton, by contrast, epitomizes the dorky arrogance and smugness of the professional elite.

This is a major part of the real world, and Trump has no competitors here. It has led, as the Economist lamented well before Trump arrived on the scene, to “the return of history”. Skillful as Trump is, he did not create these issues or the popular sentiment driving the polls; years of poor governance did.

The fact is that none of these things – free trade, more multiculturalism, faith in institutions – are going to be more popular in five years time than today. In the areas of policy most commonly associated with Trump, there is a near consensus amongst the population but yet he alone is telling the story. The Democrats are therefore reduced to hoping for a candidate to come along that will articulate Trump’s message better than Trump. That may happen; but it’s an audacious hope. In the meantime, whisper it: whilst the Democrats and Republicans are wrangling over tax cuts and repealing Obamacare, it is Trump who is on the right side of history. For now, anyway.