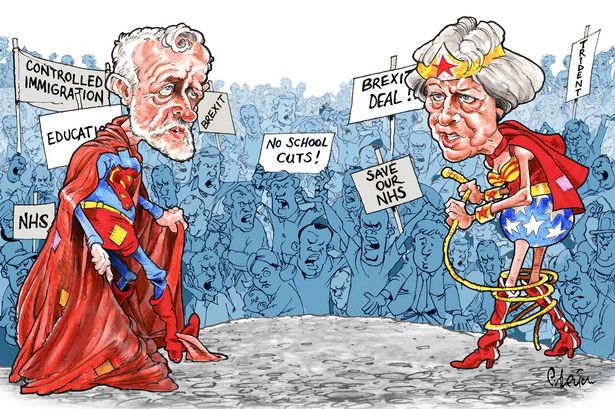 It would have been nice if I could have kicked off this blog with a profound, far-sighted piece about global imbalance in politics, trade and governance. However, circumstances dictate that now is the moment to comment on this forthcoming UK general election, and specifically, my own intentions as a long-standing Conservative Party campaigner and former local government candidate.

I have decided to abstain from this year’s General Election. Since I am living abroad, I will not bother to spoil my ballot physically, but will not cast my vote. For a few of my acquaintances this has come as a surprise but, I suspect, not a shock.

First, I should be clear that I do not support Corbyn or the Labour Party’s electoral prospects. Corbyn himself is a weak-willed do-good wannabe who will always prefer the interests of foreigners to his own people – the only really long-standing political principle he has held. The idea that his manifesto has been “costed” is an absurd joke, rather akin to initial presentations on the Millennium Dome. Furthermore, aside from the a tiny kernel of an interesting policy in the form of the land value tax, he has demonstrated very little capacity to even identify, let alone tackle, the deep-rooted issues facing Britain today beyond Brexit. Thus he has offered nothing ideological or technocratic, to solve them.

The problem is, neither has Theresa May. Those issues which we face include median wage growth, house pricing, job creation and above all sustainable financing for SMEs, the real backbone of industrial and post-industrial economies. When we look at countries at their most successful – the US post war, Japan in the 1980s, Germany today – the Mittelstand has always been the most important component of the economy; and when we are surprised by the durability of some otherwise basket-case countries like France or Italy, it is their own SME sector which is saving them.

For the first time since I have been politically conscious, the leadership of the Conservative Party does not appear in its marrow to “get it”. May and her closest advisors do not even seem curious, for the most part – there is barely anything in the Tory manifesto that shows an understanding of how (small) business works. Being marginally less harmful than Corbyn on this is not really good enough. Neither is not understanding that the long term nexus of house pricing and finance is unsustainable. This emptiness is a dangerous thing, because political choices have rarely been about “funding / cutting public services” or “stimulating growth/ taxing it” as standalone options; they are about balance of priorities. Yet we now have a choice between two parties, neither of whom offer any such equilibrium.

In the background, I have also been staunchly pro-European and remain so. Even before the manifesto launch, the cognitive dissonance in rewarding the Conservative Party with my support this year may have been too much. I needed at least one opportunity to protest against the way the referendum was called, how it was campaigned for and how Brexit policy has since been handled (and staffed, wrt David Davis, Liam Fox et al). But over the course of the campaign this nagging concern has spilled over into something altogether more irrepressible and seen me for the first time since 2001, not campaigning on the doorstep nor even trying to persuade others to vote.

It is a poor choice of options for dinner, and a shame that this inn has fallen into such disrepair. We can only hope that tomorrow’s menu might be better.