Introducing the General Theory of Government

The events of 2016 were curious because of their dichotomy: on the one hand, they were such a shock to the political classes, on the other hand they were also entirely predictable. Yet the commentariat both then and since appeared to miss (or simply forget) the most basic and obvious premise of how all politics works: namely that the ruler has to offer the ruled a mixture of both material and psychological well-being. The desire for identity is as legitimate a concern as any amount of wealth, and any government that fails to provide one or the other over a long period of time will suffer the occasional revolt. Understanding this explains Brexit, Trump and any other examples one might care to mention.

I do not claim this to be revolutionary, but given its lack of profile and given the impending elections in the US which will doubtless cause another round of soul-searching, I think it is useful to visualize this concept in a simple, easy to comprehend model. With no further ado therefore, all politics can be represented in this single chart: 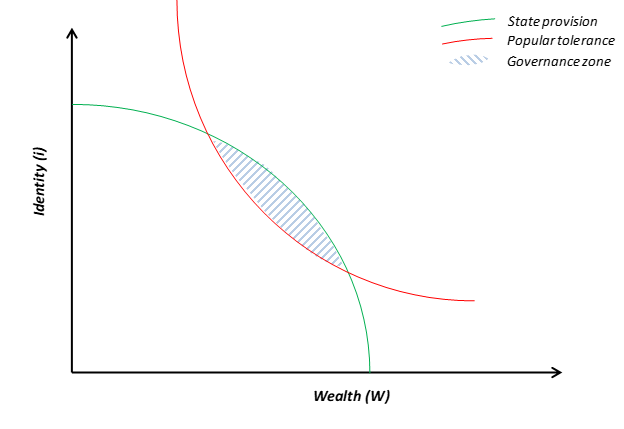 It should be easy to see where I am going with this. Into the x-axis goes all those things which politicians want to focus on: taxes, welfare spending, the cost of living. Into the y-axis are all those things politicians seem not to think exist anymore such as ethnicity, religion and language. And, in a democracy at least, any government which consistently offers too little of one or other of these parameters, will find themselves cast out. We have for perhaps too long been living in a world where the governing classes have not only mistaken how to deliver W (Sanders, &c), but completely ignored i (Trump, Farage &c). Political parties across the spectrum have spent the last few decades obsessing over the x-axis whilst assuming that the y-axis will tend to itself. Rectifying this will be, as I have alluded to before, the dominant theme of the next two decades at least in the West.

I would hope this is all intuitive enough not to need vast amounts of explanation, but in a series of posts I intend to outline the basic premise of the General Theory and specifically its core idea, the Wealth-Identity Trade-off Model (WITM™). I will go on to examine how and when a society ceases to function properly; what a society really comprises within the model (“Median Man”, or “MM“); and lastly look at some applied examples in the world today and perhaps yesterday.

What I am proposing is not in itself, I think novel; however like all good things I believe this theory synthesizes simple, intuitive ideas which have at best not been expressed before in such a manner, or perhaps may not have been coherently identified. To anyone who disagrees with this, or who have contrary opinions, I look forward to hearing them. Additionally, since these are blog posts which may one day find their way into a book, I will not footnote everything in detail. However I trust that enough is articulated to allow the reader to comprehend what I intend.