One of the less covered aspects of the Covid-19 crisis has been the wildly differing ways in which countries – and within the US even states – count the dead. This in turn has made comparability between countries almost meaningless, with very little to be learned between the numbers of deaths in Italy for instance, and those in Sweden. And by the time you bring China into the discussion, comparability ceases even to be mentioned. The singular failing of the WHO is not failure to combat the virus (which it has little power to do), but failure to at least coordinate consistent numbers. On this basis alone, the WHO has been a fiasco.

The problem is that how one counts deaths, even though it sounds like it should be scientific process, is actually an art. There will always be huge amounts of subjectivity in interpreting whether a virus like Covid-19 constitutes the “primary cause” of death, or whether it is merely a “contributary factor”. The discipline with which a group of medical practitioners understand and stay within guidelines on this reflects all sorts of local conventions and culture. Generally, one might assume that the more technocratic a society is, the more strict they would be.

Step forward Germany. Throughout recent months, German numbers have been hailed as an example of what good governance should look like, with early testing being seen as key. Yet if you look at the details, a puzzle is presented: although German total deaths are much lower than that of France, for instance, its total numbers of infections are almost the same. 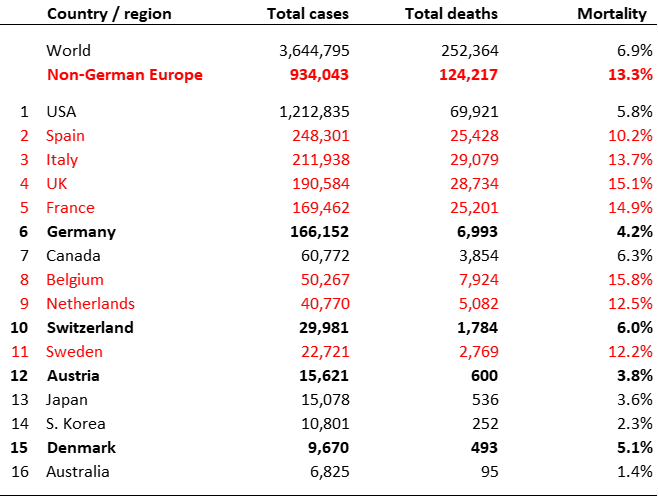 All the good governance in Germany would, one assumes, mostly have led to lower deaths through lower infections, yet this has not occurred. Rather, the gap between total deaths is partly filled by the differences in counting methodology. In fact broadly speaking “Greater Germany”, encompassing Austria, Switzerland and Denmark, together average a mortality-to-infection rate at around one-third that of Non-German Western Europe (and this is already distorted by the fact that in Switzerland, non-German cantons are reporting much higher mortality than their German brethren).

So what is going on? Whilst I have no doubt that the Germans are doing better, they are not doing that much better. But at present, if there is a difference in counting methodology, I also have no doubt that I would lean towards the German over the non-German way. What then would the UK and other countries’ mortality rates look like under the German system?

First, I have assumed a simple re-basing of these mortality rates to the Greater German average, creating a like-for-like “Germanic deaths” number for each country. This lowers them substantially. “But”, I hear you cry, “is the German healthcare system not better?” Well, perhaps it is – though in fact there does not appear to be much consensus on this from various authorities. But let us say for the sake of argument that there is a qualitative difference, we might use a simple proxy such as the number of hospital beds per capita to readjust this number and make it more apples-for-apples.

Greater Germany does have a better-than-average provision of hospital facilities, particularly in Austria and in Germany itself. Taken together, the Germanic average of hospital beds per capita is higher than most other Western European countries, although France is also quite high. If we then adjust the “Germanic deaths” number upward again, by the number of beds, we have an indicator of what German-style Covid-19 death counts might look like.

Despite making this adjustment upwards, non-German Covid-19 deaths, whilst higher than Germany’s (and almost certainly correctly so), are still substantially below the current reported numbers. In other words, if the UK used German-style death counting, its numbers of Covid-19 deaths might be about half the current number and possibly well below. The same applies to all other countries in the region. I would posit that this is the basis of real comparability, not the published statistics.

Of course, this is all back-of-the-envelope stuff and many will complain that this does not take into account all the nuances of each country’s policies and virus reactions. But there can be no doubt that:

However taking into account what has been happening in each country, if I were to guess at who’s numbers are a better and more accurate representation of the real situation, I know where my money would be. But then, I am Austrian.

(For reference I did the same analysis incorporating the Asian OECD statistics, which seem remarkably similar to Germanic numbers. China in particular, whatever else is may have covered up, has a stringent policy of how it reports Covid deaths and the region as a whole would likely be similar. However the outcomes from this analysis did not move the needle enough to start having to justify commonality between Asia and Europe)